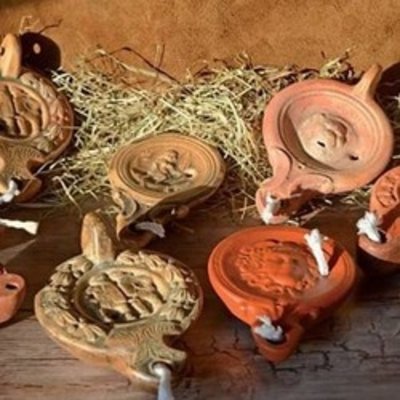 Roman pottery. What is terra sigillata?

Terra sigillata is Roman pottery with a red color. The surface is often beautifully decorated with reliefs, such as the twelve signs of the zodiac or gladiators. Terra sigillata was used in almost every Roman household and was produced in great numbers. Yet it is seen by archaeologists as a Roman luxury product.

The Romans made light by lighting oil with a wick in a ceramic oil lamp. In our collection you can find various decorated Roman oil lamps. They are fully functional! You can fill them with a vegetable oil such as olive oil, add a wick and light it. They are wonderful for home decoration or for Roman reenactment.

For Roman reenactment or home decoration we have various Roman bowls and cups. Like a mortar, which is a mixing bowl in which the Romans kneaded dough and mixed batter. We also have Roman jugs to serve wine or oil. The Romans used a balsamarium to store perfume and fragrant oil. You can also buy terra sigillata cups with relief, or with a smooth surface.