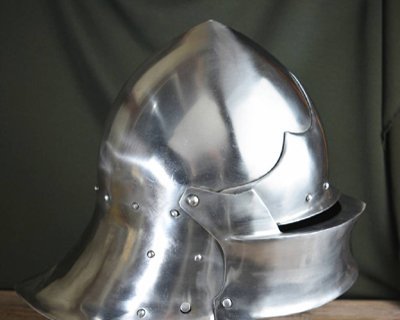 This type of helmet is named sallet, sallet helm, salad, celata or schaller. It was one of the most famous medieval helmets. This 15th century helmet is an Italian development from the bascinet. The helmet was especially popular in North-West Europe and Hungary. Various types of sallets have been produced, from knight tournament sallets to simple celetas without visors that the infantrymen wore. The sallet was often mass-produced and used for the armor of the first professional armies that emerged in the 15th century.

Not every sallet has a bevor or visor because in the Middle Ages such helmets were more expensive and not affordable for the infantry. For reenactment and LARP battles we recommend wearing a sallet helmet with a visor. This is more comfortable if you wear the helmet for a long time. You can often combine the sallet with a bevor. Most bevors with a flat raised edge will fit most sallets. Sallets without a visor could sometimes be combined with a bevor and some 15th century bevors even have their own visor.