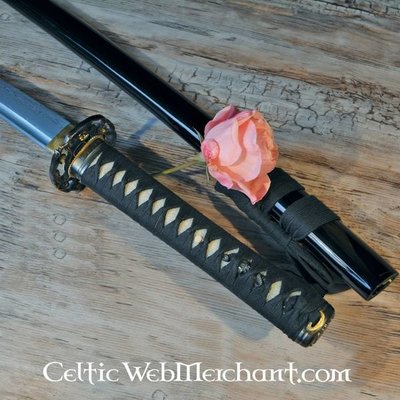 The katana is the most famous Japanese samurai sword. Katanas are always sharp and have a curved blade. The iaito is a katana that has been kept blunt for combat training purposes. Many katanas have an extra hardened edge. Although they are razor-sharp, dents and burrs are less likely to occur. The back of the katana is often made of softer steel and is intended for parrying. There are several styles of katanas, these were used exclusively by the Japanese samurai class. The katana was combined with the wakizashi sword. Sometimes it was combined with the tanto. Many well-known brands such as Cold Steel, Hanwei, Citadel and John Lee sell complete samurai sets consisting of Katana, wakizashi and tanto.

In our shop you can buy historical Japanese katana swords, katanas based on traditional historical swords, and movie katanas. We have several Kill Bill katanas and Hattori Hanzo katanas.