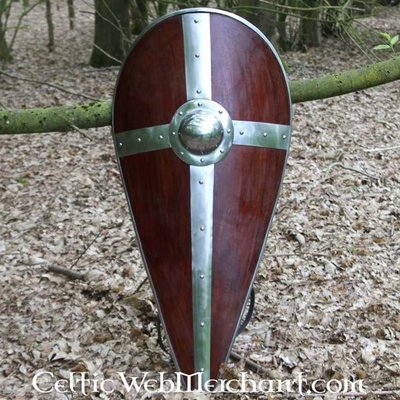 The shield is one of the oldest defensive weapons. Medieval shields were widely used in the Middle Ages. The shields were mainly made of wood and reinforced with leather and rawhide or steel. Shields also had a handle to hold them firmly and a strap for carrying it on the back while marching. The medieval shields were made in different shapes. The round shape was popular at the beginning of the Middle Ages among cavalry and infantry. Especially popular among knights and cavalry, was the kite shield. On the kite shield they painted the heraldry of the family or the area for which they fought. The kite shield is therefore the typical knight shield of the Middle Ages.

The targe is a late medieval shield with a round shape. This used to be a shield for jousting. Yet the targe is best known as the typical Scottish shield that was used during the Jacobite risings. The front of a targe was often decorated with a beautiful Celtic pattern and brass rivets for extra reinforcement of the material. The wooden targe was also covered with leather for extra strength. After the Jacobites were defeated at the Battle of Culloden, the use of the targe in battle was prohibited.