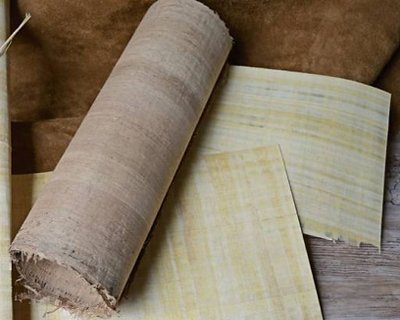 Rolls and sheets of papyrus for sale

We sell papyrus rolls and sheets for Roman reenactment, museums and art projects. Our papyrus is made in Egypt and looks beautiful and authentic. Papyrus was mainly used in Classical Antiquity. It is made from the Egyptian papyrus plant: strips of the plant are cut into strips and these are stuck on top of each other horizontally and vertically. Papyrus is a material that decomposes quickly in humid climates. One of the greatest papyrus finds comes from the desert: the Dead Sea Scrolls. The desert is the perfect place to store papyrus. Our papyrus is suitable for writing on with, for example, a calamus or calligraphy pen.

Parchment is made from animal skin. Traditionally, it was a more expensive material than papyrus. It has been used for writing since ancient times. Many people think that in the Middle Ages, entire herds of cows were slaughtered to make a prayer book. This is not true. It took a whole herd, but they used animals that had already been slaughtered for meat consumption. Our parchment is made from sheepskin. The most expensive manuscripts in the Middle Ages were made from lambskins. It took a long time for such a manuscript to be put together. Our parchment sheets are suitable for writing and painting. Ideal if you want to make a medieval miniature or write with a calligraphy pen.