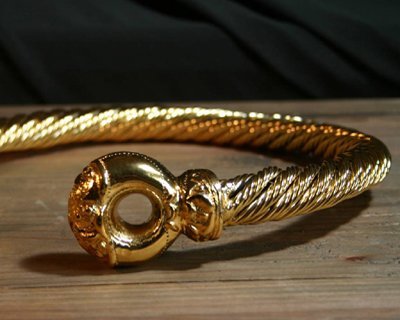 The torc is a Celtic neck ring of iron, gold, silver or bronze. Men, women and children of high descent wore the torque as a status symbol. It also functioned as a currency: rich Celts kept gold torcs as an investment. The torc was associated with gods and with noble and noble mythical Celtic figures. Cernunnos wears a torque on the Gundestrup kettle. An example of an original Celtic torque is the Snettisham torque. Our replica shows what a luxury object this torque was. Discover our collection of torques. These are beautiful pieces of jewelry for Celtic and Viking reenactment, but you can also wear them daily or on special occasions. Most torques are bendable and can be adjusted to size.

In the nordic Viking cultures the torque was a luxury jewel and object of value as well. There are Viking torques with a simple design, but there are also Viking torques with animal heads such as ravens, cats, dragons and similar animals. In our shop you can buy several torques based on original torcs from the Viking era. A perfect gift for modern Vikings and Pagans.