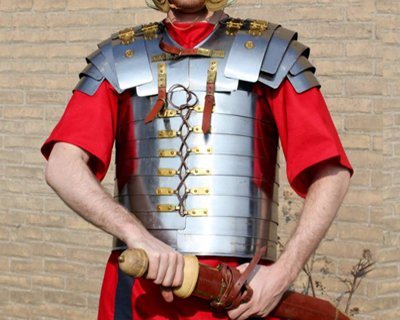 Hoplite armor: Greek thorax and other Greek armor by Deepeeka

The hoplite is the civilian soldier of the ancient Greek city states. In our shop we have Greek armor by Deepeeka. This brand specializes in ancient armor and creates replicas based on museum pieces. The hoplites wore a musculata or a thorax as chest protection. The thorax is a bell-shaped chest and back protector with archaic decorations. The musculata protects the chest and back and is made after the idealized male body. A leather apron was worn under the musculata. Greaves were also worn.

In our assortment you can find all the equipment for a Roman legionary, cavalryman or general. The musculata protects the chest and back and is shaped like a muscular torso. In battle the Romans wore simple leather or steel versions. Emperors are depicted with a highly decorated musculata on classical Roman sculptures. The subarmalis is similar to a gambeson and was worn under armor. The lorica segmentata is mostly associated with the Roman legionaries. This consists of metal strips and protected shoulders, back, stomach, chest, and hips.

The galerus and the manica are typical for gladiator equipment. The manica is an arm protection consisting of a fabric surface and steel or leather plates. Over this the retiarius wore a galerus: a shield-shaped shoulder protector. Both manica and galerus were only worn on 1 arm, for optimal freedom of movement. With the galerus, the retiarius could protect his head from blows from the opponent.