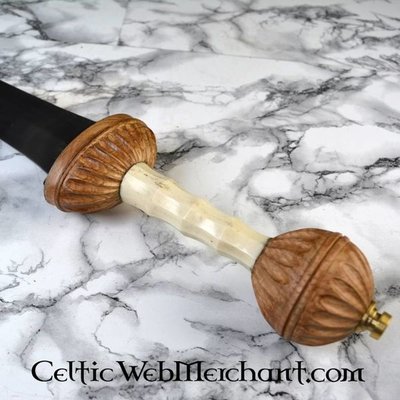 Check our large assortment of Roman swords! The gladius is the sword of the Roman legionaries in the mighty Roman army. We have an assortment of gladii of the most common archaeological types: Mainz & Pompeii. The spatha is a longer version of the gladius and was mainly used by the cavalry.

We have several types of Greek swords such as the kopis and the xiphos. The Greek hoplites were sword-armed infantrymen and well-to-do civilians, attached to their polis or city-state. The kopis is the short bronze sword of the hoplites. The kopis was a slightly curved hacking sword which was a secondary weapon.

If you want to shop a large selection of Celtic swords you have also come to the right place! Here you can find historical Celtic swords from the La Tene and Hallstatt period. In terms of design, these swords are often decorated with spirals or with an anthromoporphic figure. The falcata is a Celtiberian sword with a curved blade.