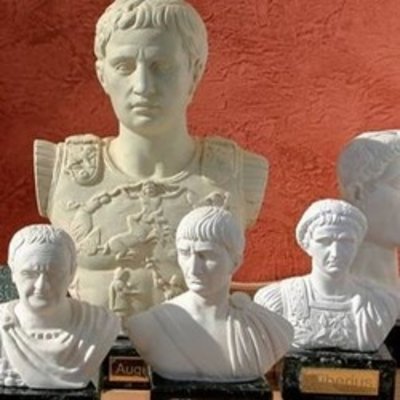 If you've ever been to Rome or any other famous ancient city, you might be familiar with the imperial statues and art sculptures from the museums. The white colors of the emperor statues have a rustic appearance, but originally the marble was painted in all kinds of colors. Time has worn the paint off. Do you want to decorate your home with Roman statues? You can leave them white or paint them in colors of your choice. Our sculptures are also suitable for the garden.

We also have statues and figurines from other Ancient cultures. For example an Egyptian pharaoh, Greek philosophers such as Plato or a Celtic statue. These are replica figurines based on historical originals from Antiquity. Our statues are cheaper than in the museum shops. The alabaster statues are also suitable for placing in the garden and for DIY painting.

In our shop you can also find reliefs of the Romans, Egyptians and Celts. For example, reliefs of Roman chariot races, gladiators, a replica of the Gundestrup cauldron and more. You can leave these reliefs in their current color, or paint them yourself. They are beautiful in the hallway, in the bathroom or outside in the garden. At the back they have an eyelet to hang them on a wall or fence.