Set the price range to filter
€
€

Movie swords for sale! Kill Bill, Lord of the Rings, Game of Thrones 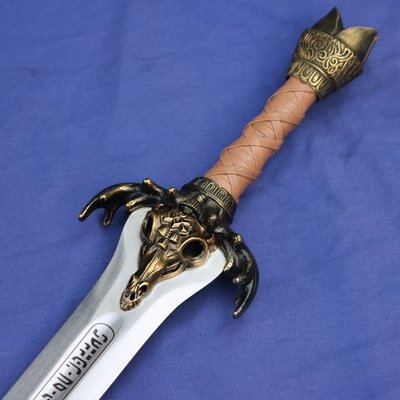 Discover our collection of official Game of Thrones swords byUnited Cutlery. These swords are exact replicas of the swords used by the actors in the series. Longclaw the sword from Jon Snow from Winterfell, Ice of Eddard Stark, Needle of Arya Stark and Oathkeeper of Brienne of Tarth. These are great collector's items for fans of the Game of Thrones series and are made in limited editions.

Hobbit & Lord of the Rings swords

We sell the official Hobbit and Lord of the Rings movie swords by United Cutlery. Like Legolas battle knives, Sting the Bilbo Baggins sword, Bard the Bowman sword and more.

We are dealer of Windlass Steelcrafts in the Benelux. Windlass has made an exclusive line of official movie swords in limited editions. In the present and past collections they have Robin Hood, Kingdom of Heaven, Age of Conan, Assassins Creed and Game of Thrones LARP swords. The collection of film swords changes annually. They also make many swords in the style of certain movies such as Braveheart swords, Black Sails and Pirates of the Caribbean pirate swords and much more.